You hear it all the time: “Purdue University doesn’t have a music school.” “Purdue is just for engineers,” or, more recently, it’s “STEM or bust.”

The last few years, I would have to agree. Not since the fantastic Jurassic Park/ Jurassic Pop scene of the late aughts and early teens has a Purdue band impressed me.  The Jurassic guys helped bring about acts like Dirty Rotten Sunshine, Broken Light, Faux Paw, Dino DNA, High School Girls and a few others. But then the core musicians of those bands moved away and broke up the bands by 2013 or so. 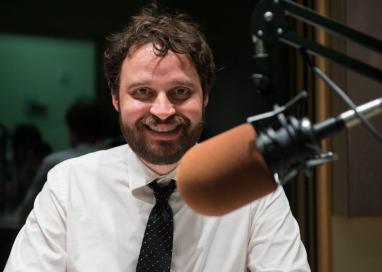 Grey Lamb has had a following for more than a year and I was proud to see a Purdue act shine. They are the best hip-hop act in the area and definitely in the top 10 bands around here today.

Grey Lamb will be playing the June 18 Taste of Tippecanoe in downtown Lafayette.

When Grey Lamb played the West Lafayette Record Store Day bash, which I helped book along with Purdue Student Concert Committee and the West Lafayette Public Library, they drew a big crowd – mostly female, a great sign for a college band – and sounded fantastic. Zuccareli announced shows in Muncie and a great slot at the Deluxe in the Old National Center in downtown Indianapolis.

That’s a sign that they get it. Playing in West Lafayette every month won’t get you very far. It’s more impressive to get booked regionally. It shows widespread success and an effort to make it to the next level.

When I think of Purdue bands, Dow Jones & the Industrials always comes to mind. The first West Lafayette punk band, Dow Jones was huge around here in the late 70s and early 80s. The band’s legacy was captured on the “Hoosier Hysteria” split LP with their Bloomington counterparts, The Gizmos. A first pressing of the band’s seven-inch is worth hundreds.

Dow Jones’ impact is still felt today. Bands like Yo La Tengo cover their music and new generations of punk rock fans fall in love with the Jones sound, which was cultivated and captured in a Salisbury Street basement.

It’s too early to tell if Grey Lamb will get on Dow Jones’ level but it’s a treat to have a band like Grey Lamb & Ghost Club proving that Boilermakers can make compelling, original music. No music school, no problem.

Tim Brouk covered the local music scene for 12 years as Arts and Entertainment Reporter for the Journal & Courier. Today, he is a proud employee of the Purdue College of Science and a music writer, photographer and videographer for thinklafayette.com.

Posted on May 12, 2016, in Uncategorized. Bookmark the permalink. Leave a comment.